A win in the final round of the Suncorp Super Netball season against Giants will see West Coast Fever finish on top of the ladder to claim the 2021 Minor Premiership.

Top-four teams Fever, Giants, NSW Swifts and Sunshine Coast Lightning are all locked on 32 points heading into Round 14, with Fever having the highest percentage.

A win against Giants will see Fever qualify for the Major Semi-Final, where they will meet the winner of this weekend’s other top-four clash between Swifts and Lightning.

Swifts and Lightning are the only teams to have defeated Fever this season, with consecutive losses coming in Round 9 and 10 off the back of a two-week break.

Fever bounced back with victories over Thunderbirds, Vixens, Firebirds and Magpies, following an undefeated first half of the season, which included five wins away from home.

Winning the Minor Premiership would be a fantastic reward in a Suncorp Super Netball Season unlike any other.

West Coast Fever opened the Suncorp Super Netball season with a strong win over Melbourne Vixens spearheaded by 54 goals from Jhaniele Fowler, two goals and two super-goals from Alice Teague-Neeld, and three goals and a super-goal from Sahsa Glasgow in her Fever debut.

West Coast Fever claimed a hard-fought win over NSW Swifts in their first home game at RAC Arena since 2019, fighting back from a four-goal deficit in the first quarter. Feverish defence in the final quarter highlighted by a Courtney Bruce intercept and two forced turnovers by Jess Anstiss, saw Jhaniele Fowler seal the win with a super-shot to the delight of the 4927 Green Army fans in attendance.

West Coast Fever showed their grit and dug deep to recover from a nine-point deficit and record an impressive win over Sunshine Coast Lightning away from home. Captain Courtney Bruce was inspirational in defence with five intercepts and seven gains, helping to turn the tide after a slow start to the game. 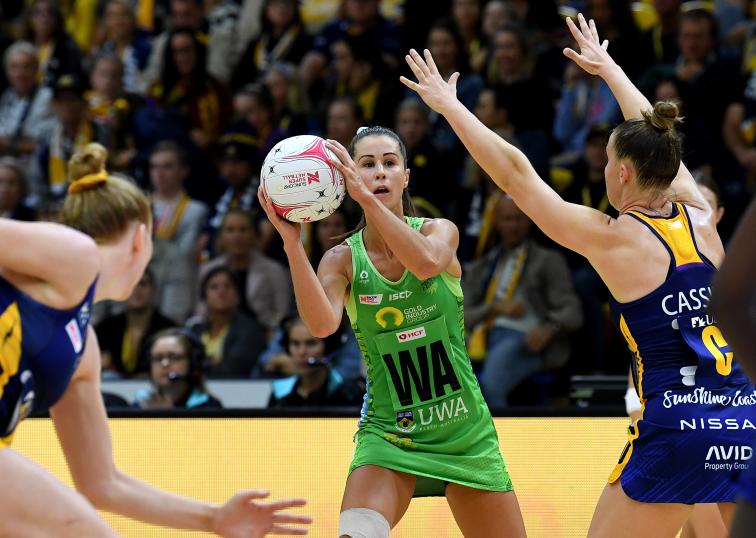 Fever held off a fast-finishing Adelaide Thunderbirds side after fighting back from an eight-point deficit to level the scores at half time and then build a seven-point lead in the third. Three consecutive super-shots saw the home side halve a 10-point margin with less than two minutes remaining before Fever steadied and Jhaniele Fowler sealed the win with a super-shot of her own.

West Coast Fever claimed a thrilling one-goal win against Giants in Indigenous Round. After opening scoring with a Jhaniele Fowler goal, Fever didn’t lead again until the dying stages of the fourth quarter. The lead exchanged hands several times in the dying minutes, with Giants’ shooter Jo Harten scoring consecutive Suncorp super-shots before being called for a held ball. Fowler then received a penalty on the final siren to secure the win in front of more than 4500 screaming green army fans. 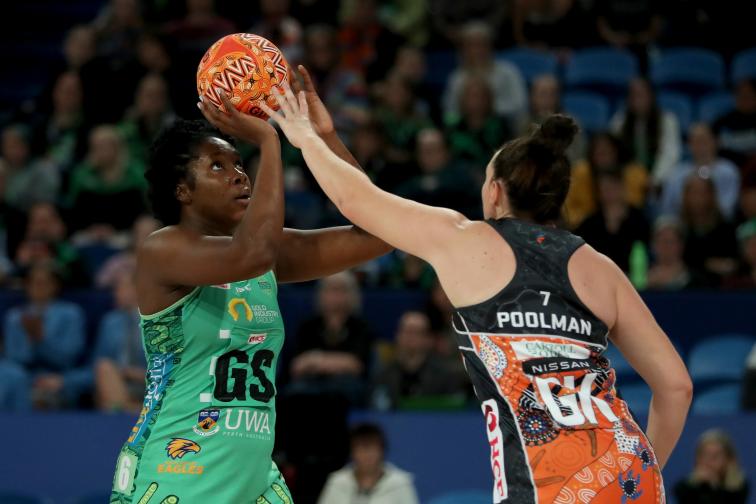 Fever recorded a convincing win over Magpies with an impressive display from every player across the court. Captain Courtney Bruce led by example with 11 gains, 7 deflections and five intercepts to be named player of the match, while Jhaniele Fowler scored 59 goals at 98 per cent accuracy, Sasha Glasgow contributed 5 Suncorp super-shots and Alice Teague-Neeld added two.

Fever extended their unbeaten record to a clean sweep of all seven teams with a hard-fought win over Firebirds. Captain Courtney Bruce was the barometer after landing awkwardly on her ankle contesting a shot in the opening term before recovering superbly to apply her trademark defensive pressure with 12 gains and five intercepts. Jhaniele Fowler continued her consistency in the circle with 62 goals from 64 attempts, while Verity Charles recorded 25 goal assists, Alice Teague-Neeld 21 and Jess Anstiss 18. 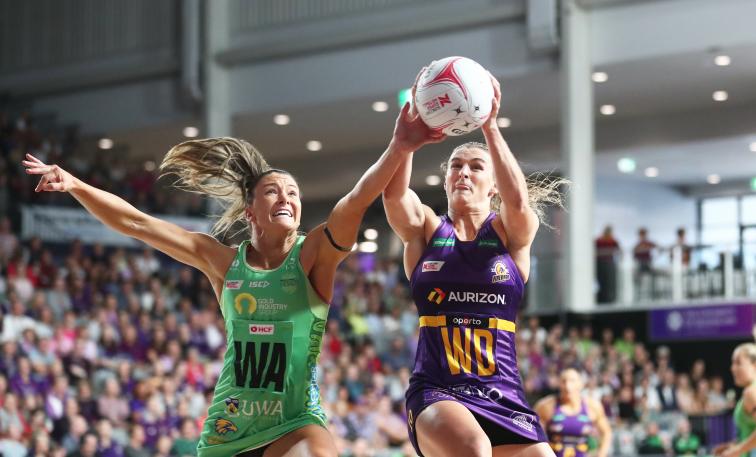 The fixture originally scheduled at RAC Arena in Perth on June 27 was played in July in the Super Netball hub in Brisbane. A strong defensive effort, sharp shooting and creative playmaking saw Fever take control early and withstand a fightback from the Vixens in the third quarter to claim the win.

Fever lost by one goal in a thrilling finish against NSW Swifts in Melbourne. Trailing by nine goals at three-quarter time, Alice Teague-Neeld led a spirited come-back for Fever with timely intercepts and three consecutive Suncorp Super-Shots to cut the margin back to a solitary goal in the final minutes of the game. Sasha Glasgow also hit her third super-shot of the game as Fever clawed their way back into the contest. However, Swifts were able to remain composed and soak up the final seconds on the clock to hold on for the win.

Sunshine Coast Lightning broke their recent run of four losses to West Coast Fever with an impressive 65-61 win in Perth. Turnovers proved costly for Fever, who had 21 compared to Lightning’s 16, while the impact of Lightning Goal Shooter Cara Koenen and her accomplice in attack Steph Wood was also important.  Fever Coach Stacey Marinkovich said Lightning’s attack on the ball, combined with Fever’s inconsistency over four quarters was the difference.

West Coast Fever fired on all cylinders to claim a convincing win over Adelaide Thunderbirds in front of 6817 fans at RAC Arena in a fitting farewell for coach Stacey Marinkovich in her last home game before she departs at the end of the season to become full-time Australian Diamonds coach. 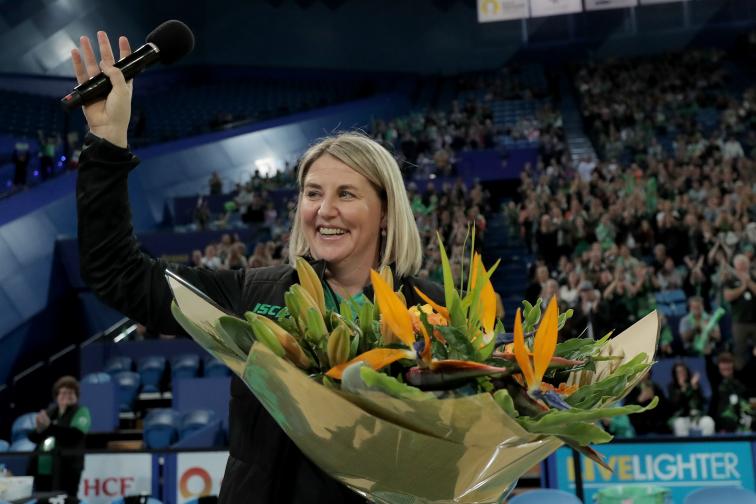 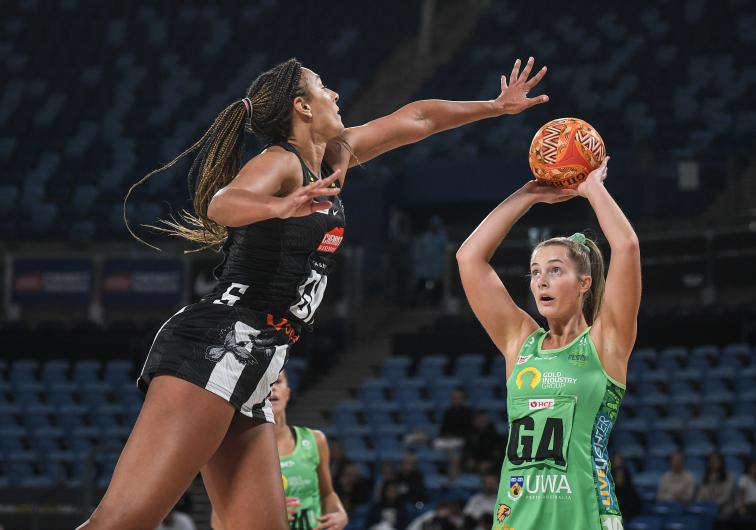