West Coast Fever are set to step out in Round 7, against the Collingwood Magpies, wearing the highly anticipated Fan Dress designed by Fever Fan, Chloe Turnbull and selected by the online Fever community earlier this year.

Chloe’s original design won the hearts of Fever Fans with its display of iconic Western Australian flora and fauna, featuring the Black Swan and Kangaroo Paw Plant on the rear of the dress.

On Tuesday, players will take to the court in one of the most eye-catching dresses in the league, with a rainbow of colours incorporated into the designs front our Fever players will be easy to spot at Nissan Arena. Designer and aspiring netballer, Chloe Turnbull explained how she came up with the winning design.

“I chose the Swan and Kangaroo Paw because I thought it was a good way to capture WA. I thought the flowers would brighten up the dress and give it a happy, coastal vibe.” said Turnbull. Also explaining that the design took the teen a few days, completing it during COVID-19 isolation earlier this year.

The addition of the words ‘Stronger Together’ in the design, now more relevant than ever, resonated with the Fever Family as we remain united with our fans and members during what has proven to be a challenging season for the national league. Reiterating the sentiment that our fans and members are just as important as the 12 athletes in green to the Club’s success.

Chloe has expressed her excitement to watch the Fever players in her design, which is to be showcased on August 25 in the QLD Hub, against Victorian team the Collingwood Magpies.

“The thought of the players wearing the dress is pretty amazing. I hope the West Coast Fever players like the design and enjoy wearing it as much as I enjoyed creating it.” said Turnbull. “I’m a huge netball fan and love watching and playing the game. I enjoy watching SSN and would love to watch the players wearing my dress live!”

Although a goal shooter of 8-years, the 13-year-old’s favourite West Coast Fever player is Fever Captain and Australian Diamonds defender, Courtney Bruce. Proud to be a role model for the next generation of netballers coming through the pathway, Bruce is thrilled to be wearing Chloe’s design and had some words of encouragement for the young shooter.

“The whole team is excited to step out in Chloe’s unique design on Tuesday, we wish that she could be in the crowd to watch but know she will be cheering us on at home.” Said Bruce.

“I hope that having us wear her design and receiving one of her own will help to inspire her through her netball journey for years to come. She holds a special place in the Fever Family now and who knows, maybe we will be seeing ‘Turnbull’ across the back of more Fever dresses in the future.”

Check out Chloe’s dress live in action against the Collingwood Magpies, this Tuesday 25 August by tuning into Telstra TV or on the Netball Live App. 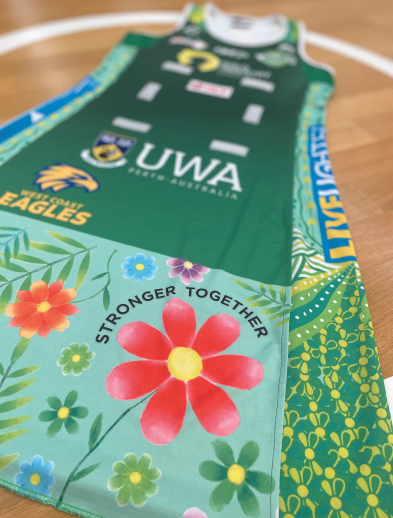 WA! Get Ready To Show Your Grit

EVERYTHING IS POSSIBLE: A STORY OF TRIUMPH AND TEARS