West Coast Fever fired on all cylinders to claim a convincing 69-44 win over the Adelaide Thunderbirds in front of 6817 fans at RAC Arena in a fitting farewell for coach Stacey Marinkovich in what is expected to be her last home game before she departs at the end of the season to become full-time Australian Diamonds coach.

“We certainly came out with a lot more intent in how we wanted to play. I think we got back to hard ball contests and really got our speed back and played with a bit more freedom,” Marinkovich said.

“When you get in front of the green army there is so much passion in this state and the amount of work that’s gone on behind the scenes as a club and what the girls have evolved on the court has been huge.

“I’m really thankful to have been a part of that. We’ve still got the season to finish but I’m forever grateful to Fever. They gave me an opportunity as a rookie coach and at the end of the day I wouldn’t be anywhere if it wasn’t for them giving me a go.

“We will enjoy this win and when we know what our opposition is we will focus on that but for the time being it gives us time to just keep focussing on us and building the way we want to play.”

After a fast-paced start the Thunderbirds edged ahead by three goals before Fever hit back to reduce the margin to a goal.

Fever came out firing in the second quarter with Bruce, Aryang and Francis-Bayman creating a defensive wall and making five intercepts between them to hold Thunderbirds to 10 goals for the quarter, while at the other end Charles continued going long to Fowler, who took her half time tally to 30 goals without a miss.

Teague-Neeld added a Super-Shot to her 11 assists for the first half and Fever led 34-25 at the main break.

Glasgow entered the game in the third quarter an made an immediate impact, forcing a mid-court turnover and then scoring as Fever extended their advantage to 50-36 at three-quarter time, with Fowler taking her individual total to 45 goals at 100 per cent accuracy.

Fever continued firing in the fourth, with Fowler taking her total to 58 goals while Glasgow added another Super-Shot to bring the crowd to their feet as they celebrated the resounding 25-goal win. 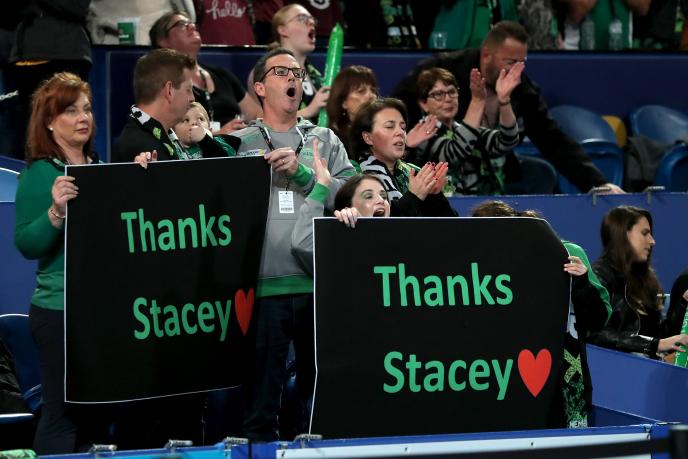 Fever move into top spot with big win over Magpies

Season to continue during lockdown in Queensland